"Inspiration exists, but it has to find you working"

“A dream finds the way”

Once I realized that I am near the truth and this made me free. It is the best if one does in his life something that brings pleasure, what interesting is. While learning kinds and methods of handiworks I came to a decision that mostly I prefer lacework. Having learned classical knitting I chose lacework done with a crotchet. This very instrument has the largest technological potential from my point of view. First it came to my mind intuitively but then I realized it.

In the 80-es I found an interest in needlepoint but couldn’t even imagine what perspectives it would open to the “beloved crotchet”.

While working in “Fashion magazine” in the 90-es I got a task from the editor to develop a design of knitwear structure which could not be done using a traditional method. As it is known new facts are better to be learned with simple methods and new methods with the facts that are known. Then an idea came to my mind why not to use the technology of needlepoint which was already familiar to me as a basis while solving this problem. New method of knitting helped me to develop irregular pattern different to a classical one. Using this method of knitting a garment is formed from hanging loops and connecting elements using a pattern the contour of which is put on the non-deforming foundation as a carton.

What differs this technology is that the contour of the pattern and fragments of a garment are stitched with firm threads forming sub foundation of the garment. Chains are knitted on this sub foundation and patterns of connecting elements – hanging loops – are knitted in optional ways between the chains fastening them on the place where they are crossed and on the chains. After the garment is formed foundation and sub foundation are to be taken out. The model can include other decorative elements done with other methods: macramé and needle knitting, pieces of material, leather. They are also fixed on a paper and connected being knitted with a crotchet.

“Curled” pattern appeared using of this technology gives special charm to the garments. Using this method different pattern for blouses, dresses and other garments can be done.

Before publication in May 1995 I applied for a priority on developed technology and in November 1997 I got patent no. 2093625 on a development of “Method of knitting”.

Next step was making tapestry using simple patterns first and then ornaments based on this technology. Time passed and my experience lead me to a vase made of crystal damaged in several places and I tried to reconstruct it concerning developed technology and other methods I knew.

So, for three years I have been doing needlepoint on glass. Since May 2007 vases, lamps, bottles and cans are “dressed in lace”. It is interesting as forms are different and different technological problems lead to other developments and handmade patterns do not copy previous ones.

The process of cognition is for that reason attractive that it is endless and teaches thinking constantly and to see something new. Lacework is poetry. Holland though being weaved by hand and amazingly fancied is therefore prose. Using mostly crotchets no. 0.6 and 0.5 and the thinnest threads I realized that everything happens according to the same philosophical laws in life. Life’s road is like a thread: first it is straight and then a knot appears unexpectedly. It needs to be untied without pulling the ends as the weak have the worst. 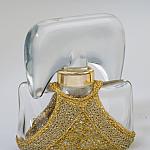 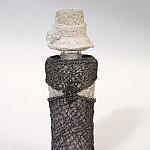 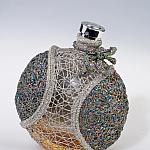 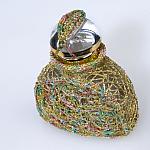 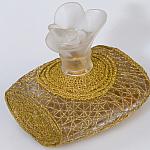 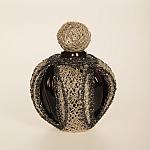 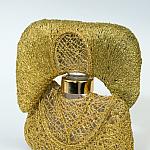